Why Big Bear Ski Resorts Are The Best For Skiing In SoCal? 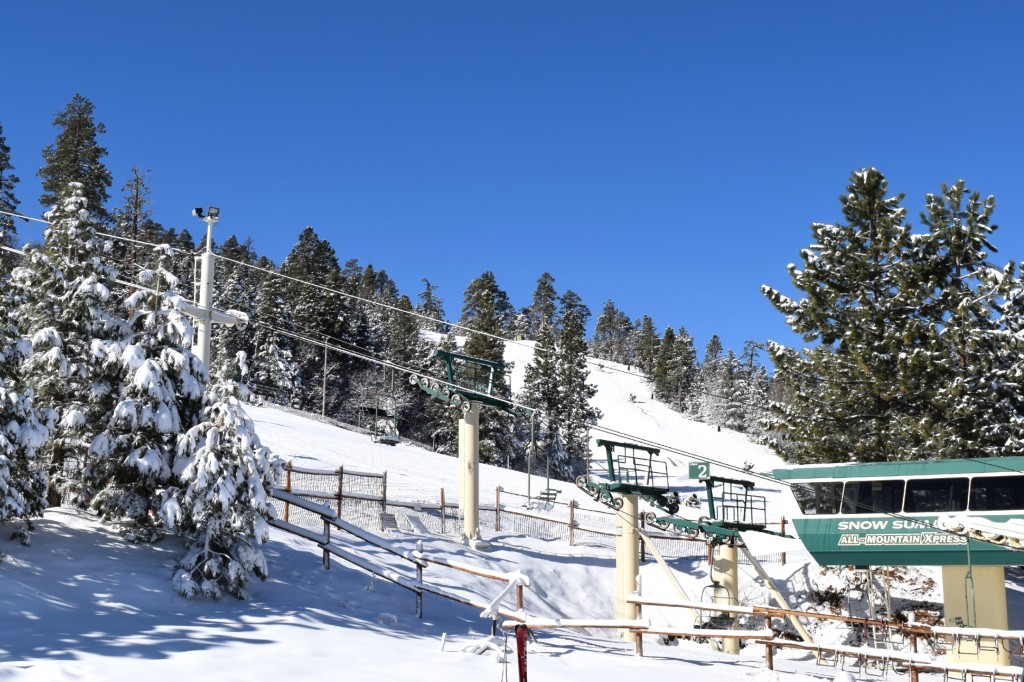 In 1925 the Motor Transit Company was looking for a way to get passengers during the winter months to the area of Crestline, Lake Arrowhead, Running Springs and the Big Bear Valley.  Walter Kruckman, the General Traffic Agent for the MTC, helped form the Southern California Winter Sports League with Judge Clifford Lynn.  Kruckman began promoting the area with radio spots, and department stores in Los Angeles began selling skis and winter clothing. 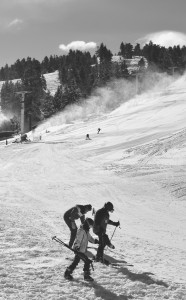 It didn’t take long for people to see why Big Bear has the best skiing in SoCal.  In the early 1930’s, the Viking Ski Club from Los Angeles began holding competitions and offering ski instruction. The Lynn Sling Lift opened in 1938 at the Snow Forest Ski Resort in Big Bear, named after Judge Lynn.  In the 1940’s and 50’s, more rope tows were installed including the Upper and Lower Moonridge Rope Tow where the base of Bear Mountain is today.  The 1950’s turned Big Bear Lake into a four season resort town with several different ski resorts around the area including Mill Creek, where the current Magic Mountain is located and Rebel Ridge where Big Bear Snow Play is today.

In 1947, Tommy Tyndall started ski schools at the local resorts.  He founded the Big Bear Winter Club and in 1949 held the Snow Carnival competition.  In 1952 he created the Snow Summit Ski Corporation and enlisted the help of friends and local investors to open the largest ski resort in the San Bernardino mountains with a mile-long double chairlift to take visitors to the top. 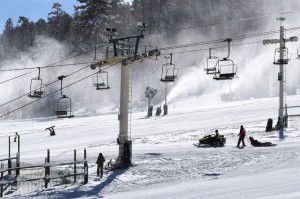 In 1955 the Upper Moonridge Rope Tow made snow but the technology proved to be impractical.  Three years later the Rebel Ridge Ski Area successfully began making snow on a 800 foot rope tow, bringing the new technology to Big Bear.  In 1964 Tyndall gathered the financial resources and installed the largest snow making system in Southern California at Snow Summit. 1969 was a great year for snow and Tyndall was able to install a second chair lift.  The Moonridge Rope Tows were purchased by former Snow Summit ski instructors including Fred Goldsmith (Goldsmith’s Boardhouse) and Bill Strickland.  They renamed the resort, Goldmine, and installed a mile long chairlift to the top.  Unfortunately, the years to follow were poor snow seasons and in 1972 Goldmine went into receivership  The winter months of 1972-73 brought better snow conditions and Goldmine recovered.  In the 1970’s the Big Bear Valley became known as a “ski town” and paved the way for today’s winter industries. 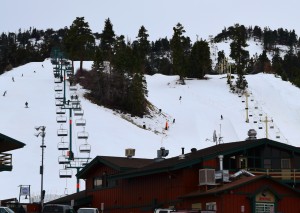 Goldmine had three chair lifts and an expanded snow making system by 1980, and in 1988 was bought out by the S-K-I Ltd who owned ski areas in Vermont.  They renamed it Bear Mountain and invested millions of dollars into improvements and the first high-speed chair lift in Big Bear Lake.  Snowboarding was the hot new sport and the early 1990’s brought more visitors to the mountain.  Bear Mountain has been bought and sold several times over the past few years including by Snow Summit Ski Corporation.  In 2014 both Bear Mountain and Snow Summit were purchased by the operators of Mammoth Mountain. 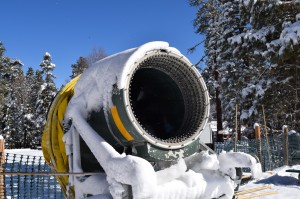 Snowmaking has come a long way since the early days of water mains and fire hoses.  Machine made snow is made from frozen water, just like the stuff mother nature provides.  Unlike natural snow that is crystal shaped, machine made snow is round, allowing it to be groomed, retain it’s shape longer and in turn, last longer.  Machine made snow still requires cold temperatures, generally below 32 degrees with low humidity.  Between 3,000-5,000 gallons of water per minute are used.  That’s enough water to fill a backyard pool in about 5 minutes.  The water is pumped into the Airless (fan) gun and propels the water into the air where it freezes and falls to the ground as snow.  The longer the snow has to fall, the more it can dry out a bit and become the fluffy white stuff we all know and love.  Big Bear Lake has been perfecting the art of snowmaking for 60 years and the snow resorts employ some of the best groomers to make sure the slopes are perfect for skiing and snowboarding.

Big Bear Lake has attracted skiing and snowboarding enthusiasts and professionals from around the globe who have discovered why Big Bear has the best skiing in SoCal.  In the late 1920’s, Sven Hansen, a ski champion from Norway was an instructor in Big Bear.  Since then, Big Bear Lake has supported Olympic snowboarder Shaun White, hosted multiple competitions and has gear experts at several shops including Fred Goldsmith’s grandchildren who own and operate Goldsmith’s Boardhouse.  Both Bear Mountain and Snow Summit have instructors to teach the basics or improve student’s skills.  Each resort has learning areas, moderate runs or runs that only the experienced should attempt.  Big Bear Lake winter resorts are family friendly and are known for their accessibility and enjoyment of all skiing and snowboarding experience levels.  There are plenty of shops for renting or purchasing gear and Destination Big Bear has cabin rentals close to the slopes. 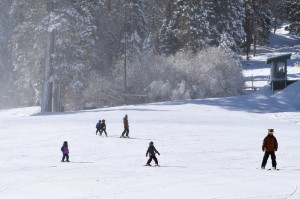 Learn to ski at Snow Summit

Come see why Big Bear has the best skiining in SoCal.  Get 15% off rentals at GetBoards and get guaranteed problem free rentals and service.  Visit www.getboards.com for more information.  Goldsmith’s Boardhouse has the only local certified bootfitters and carry the smallest size gear on the market.  For more information about all their services, visit www.goldsmithsboardandski.com.  Destination Big Bear has cabin rentals for groups up to 16 people.  Let our vacation experts help you plan the perfect getaway with a luxury cabin rental, pet friendly cabin rental in Big Bear or a cabin close to Bear Mountain or Snow Summit.  Enjoy great deals during the week or come for the excitement of the weekends.  Call (909) 752-0234 to book your vacation rental in Big Bear Lake.